Today I thought I’d post something a little different.  I realize I had a category for hip-hop, but have yet to include some hip-hop in my site.  Due to this I decided to scour the web for some solid, Christian hip-hop, and that’s exactly what I found.

Hailing from Las Vegas, Nevada, is Irregular.  While new to  holy hip-hop, he is definitely not new to hip-hop.  Having appeared on various mixtapes for secular rappers like Hieroglyphics and E-40, and opening for the likes of Raekwon and Taleb Kweli.  With this new found success, Irregular ended up falling to the traps of the world.  Specifically with an addiction to drugs.

However, through the power of Christ, Irregular was able to turn is life around, becoming completely sober, getting involved in ministry, and then putting out a mixtape entitled irregular4Christ, and his first EP Merely a Glimpse.

The first single off the EP is available for free here.  Carrying the same title as the EP “Merely a Glimpse”, is exactly that.  A glimpse into who Irregular is.  Featuring some great production including some electric guitar, and other live instruments, it’s definitely worth checking out. 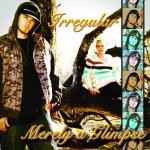 One response to “Irregular – “Merely a Glimpse””